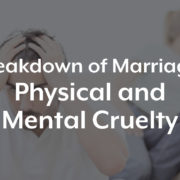 Separation alone is difficult to deal with.  When the issues concerning adultery, physical and mental cruelty become involved, it can make a difficult situation that much worse.  If these concerns are a part of the separation between two spouses, courts here in Canada will implement a “no fault” regime.  This means that when a person’s rights are being determined in regards to: the children, child or spousal support, and property division, the fault of one party causing the breakdown of the marriage is usually not taken into consideration.

Courts will approach divorce in an objective manner; this generally means they do not look at the reasons for separation, and they won’t punish a spouse for their role in the breakdown of the marriage.

There are three reasons why a divorce can be granted:

This blog post will focus on the third ground for divorce: physical and mental cruelty.  See our previous blog post for more information on the first ground of separation.

If a party is claiming one of these grounds for divorce, they will have the onus of proving it on a balance of probabilities.  Trying to prove domestic violence in this regard can be difficult, costly, time consuming, and can be very emotionally draining.

Catherine Christopher in The Law of Domestic Conflict in Canada, identifies 4 different types of domestic violence:

In order for the physical and mental cruelty to be used as a reason for divorce, it must be “of such kind as to render intolerable the continued cohabitation of the spouses.”  See the language in s. 8(2)(b)(ii) of the Divorce Act.  This is a high bar to meet and will require diligent evidence production in order to satisfy the court that the abuse meets that bar.

Should the court find that the abuse does meet that high bar, the abuse does not impact the amount of money paid in spousal or child support.  However, this conduct by one spouse can affect custody and access arrangements as is discussed in our blog post here.