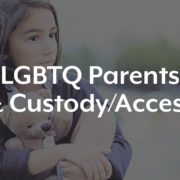 One fear that some parents may have is whether their LGBTQ status might affect their rights when it comes to Custody and Access.  Thankfully, this is not in and of itself a ground to refuse custody or access to a parent as the case law below will demonstrate.

As mentioned in our last post regarding conduct that can affect custody or access, what courts will want to see is whether the conduct of the parent impacts the best interest of the child.

What courts will do is consider a parent’s LGBTQ orientation among other factors to make a determination about a person’s ability to parent.  They will look at whether that orientation actually affects the healthy development of the child.  The Courts in Bezaire v Bezaire had the following to say at para 18 of the decision:

“In my view homosexuality, either as a tendency, a proclivity or a practised way of life is not in itself alone a ground for refusing custody to the parent with respect to whom such evidence is given. The question is and must always be what effect upon the welfare of the children that aspect of the parent’s make up and lifestyle has, and it will therefore be a question of evidence in that very case as to whether what has been shown to exist has or may tend to have effects adverse to the welfare of the children.”

In addition to this, the court in Re K states the following:

What we can see from this is that courts are very clear in stating that sexual orientation alone is no ground in and of itself that negatively impacts on a person’s ability to parent their children, meaning that LGBTQ parents are recognized as equally capable as heterosexual parents when it comes to decisions regarding custody.

The same principles apply when courts make decisions regarding access to children.  Again, the courts are going to make a determination on whether a parent’s LGBTQ orientation, as well as other facts, affects the child’s best interest.

For example, the courts in Templeman v Templeman found that an openly gay lifestyle was not a reason in and of itself to restrict access or require that it be supervised.  In Templeman, psychiatric evidence was produced that showed conclusively that the father had a strong loving bond with his children, and that his gay lifestyle posed no risks in harming his children.